DirectX 12 is the latest in the long line of Windows system software suites that’s designed to help applications work directly with your video and sound units. It’s an API, or application programming software. Primarily, it’s used to allow video games and animation software to make the best use of the hardware installed in the system. Video games, animation, and modelling software using DirectX 12 can make use of a plethora of features including the multimedia accelerator options to help software more efficiently.

Here, we’re going to look at how you can download and install the latest version of DirectX 12 with all patches included for Windows systems.

How to download and install DirectX 12 for Windows systems

Here, we break down the steps of installing the latest version of DirectX 12 to your system.

Things to keep in mind about DirectX 12

DirectX 12 marks one of the most ambitious, yet subtle leaps in the API’s history of development. Here, we’re going to look at some of the major changes and what they mean under a more technical lens.

Practically, gamers might not notice a huge difference between DirectX 11 and 12 immediately. It doesn’t offer new rendering options or a massive jump in frames per second. However, it does help games use your video and sound hardware a lot more efficiently, meaning that games will run more smoothly with enhanced graphics.

Your mileage with DirectX 12 will vary, depending on your hardware. Multicore CPU systems have the most benefit to gain, but the only systems that run games better with DirectX 11 are those that aren’t compatible with the latest version.

There are also a number of upcoming games currently being developed with DirectX 12 support, as follows:

Keep in mind that DirectX 12 as an API offers significant advantages to all users, not just those playing the games mentioned above. Other games are developed to support certain graphics cards, like Nvidia and AMD, and DirectX 12 can help games access that hardware more readily. More games are likely to be continued to be developed specifically for DirectX 12, however. If you want to get the best out of the latest games, then using a Windows 10 system alongside DirectX 12 is your best bet.

Hopefully, this guide helps you understand the vital role that DirectX 12 can play in all applications that make use of the video and graphics cards installed on your system. From improving video game performance to enhancing the options available to software developers, animators, and 3D model app users. All you have to do is follow the links and instructions featured above to install it and get a lot more out of your favorite software.

Behold the difference between DirectX 11 and DirectX 12: 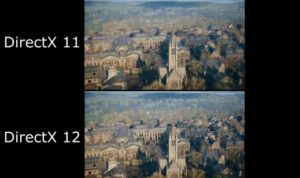